We’re so excited to introduce you to Contena Superstar: Tim White. He’s had fast success after signing up with Contena … 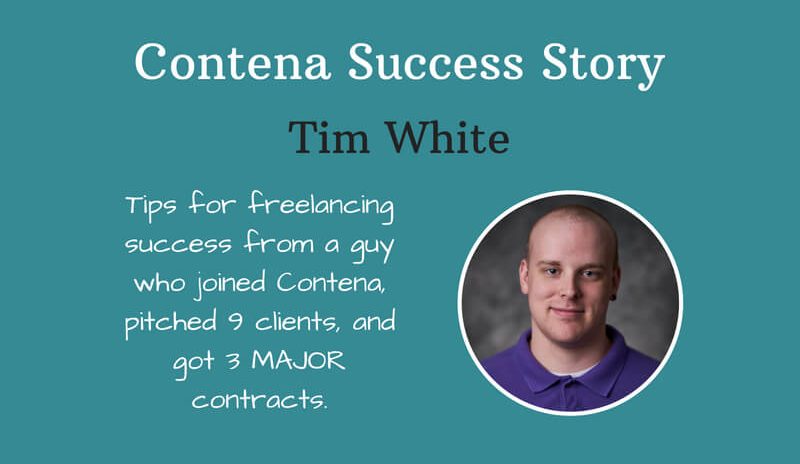 We’re so excited to introduce you to Contena Superstar: Tim White. He’s had fast success after signing up with Contena Acadmey so we asked him to share his best tips. One thing we want to tell you: He was hesitant to join, which is part of why we wanted to share his story with you.

In January 2018, Tim began his full-time, professional writing career. Prior to that, he spent most of his adult life in medicine as a paramedic and a nurse, starting a dog training business in 2016 after he left medicine.

He said, “I would occasionally find opportunities to write about medical things, sometimes paid, sometimes unpaid. But, I never actively looked for it…I got a few short stories and things published and I’ve always written just for myself.”

As a professional in the medical field, that’s where Tim focused his energy.

Even though people would tell him he could get paid for his writing he’d always say “Well, I love writing, but I love medicine a little bit more.”

Eventually he decided to leave the medical field and “writing was the next obvious choice, because you gotta love what you do.”

To get to where he was in his first profession, he obviously spent a lot of time studying. So, it’s no surprise that when he decided he wanted to shift gears to writing, he took a similar approach, learning as much as he could.

Some people would be discouraged by that, but instead, Tim dug in, “and started to look at other freelancers and their personal websites,” learning from each one and paying special attention to the people who had careers like the ones he aspired to have.

It was during this research that he stumbled onto Contena Academy.

He says “I back-burnered [signing up for Contena] for a while because the price tag kind of scared me away.”

We love this honesty. We know there can be sticker shock.

But, he told us, “I’ve always been an investor; you’ve got to invest or spend money to make money kind of attitude. I kept seeing reviews from other writers who said they don’t use Contena anymore, but that they did. Or that they hadn’t used it, but had positive impressions. And when I saw that there was a 30-day guarantee and you could get your money back, I said ‘Screw it, let’s see what happens.’”

And what happened is impressive!

Very quickly, Tim was able to go through the training lessons in Contena Academy, work with his coach Amanda, and secure several lucrative contracts.

While Tim is the first to tell you that there are many ideas of what success is (the idea of success is actually a topic he loves to write about), we’d say he’s been quite successful.

So, we decided to round up some of his best tips and share them here. You might want to print this out, or take some notes, because Tim told me “In the first major round of pitching 8 or 9 clients, the three main clients I wanted to work for all ended up eventually hiring me.”

Tim is obviously passionate about writing and sharing that information with others.

Before we wrapped up our conversation, I asked him “If someone was skeptical to join Contena Academy, like you were, what would you say?”

For me, the 30-day refund period was instrumental. I doubt I would have signed up without it. You really have nothing to lose. I don’t think I would have been unsuccessful without Contena, I would have eventually gotten here anyway, but it’s a question about how you want to spend your time. It saved me a tremendous amount of effort and saved me from doing a lot of trial and effort. Not everyone will think that’s worth the money, but I certainly do.