Meet Contena Superstar Kenzie Bradshaw, a 20-something who has been growing her business as a freelance writer since 2017. Before … 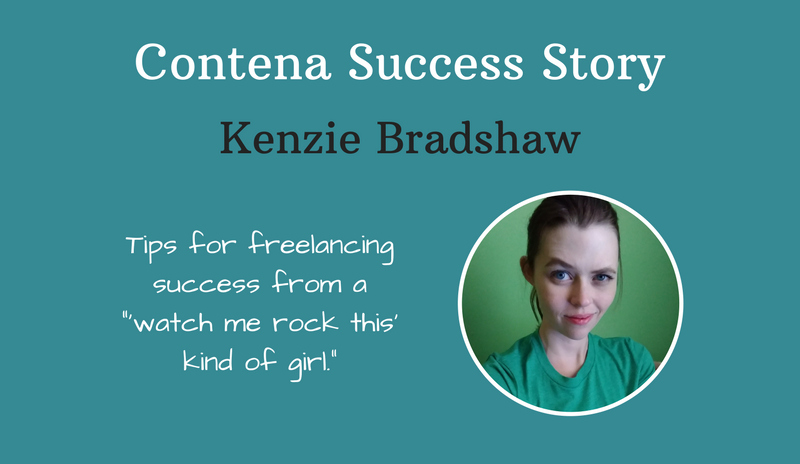 Meet Contena Superstar Kenzie Bradshaw, a 20-something who has been growing her business as a freelance writer since 2017.

Before starting her freelance career, she earned a degree in Soil Science with a specialization in soil physics and had jobs ranging from snake handling with the Fish and Wildlife Service through the AmeriCorps program to helping create new flavor profiles for Sargento cheese.

She discovered “the reality is that many traditional professions would rather hire a specialist over a generalist.” However, as a freelancer, it has helped to have a variety of areas she’s knowledgeable about and comfortable with.

We think it’s great that Kenzie shows how pretty much any road can lead to a freelance writing career.

Her love of travel and freedom along with a 3-month trip to Thailand encouraged her to shift away from the traditional workforce and try her hand at getting paid to write.

However, before she started with Contena Academy, she’d “been on those other websites. I’ve been there…” (We’re going to spare you the details of the first job she was offered- it’s not good), but she says, “I turned it down because it was so creepy and I had so many questions. I got all kinds of red flags.”

Kenzie quickly learned that signing up for Contena Academy and working with her coach, Amanda, provided the support and quality that other sites couldn’t provide. The extra eyes and ears were especially useful for a new freelancer.

Amanda was so encouraging to me. I had no idea if my writing would be commercial enough to be worth anything, and I was worried that my lack of a single area of expertise would put me at a major disadvantage.

Amanda really helped me to polish my style and encouraged me that by being able to write in a wide variety of topics, I would have a greater chance of success.

Kenzie was hired for a regular gig quickly after starting as a freelancer: “I landed my first position with Wide Open Spaces with a minimum of 12 articles a month” which isn’t surprising for someone who says, “I’m a fight to the top, butt-kicking, ‘watch me rock this’ kind of girl!”

It’s this kind of confidence that can help freelancers when they’re first starting out.

Though Kenzie still has a part-time job, (which we think is a great way to supplement your freelancing career when you’re first starting out), her goal is to “make [writing] my sole job.”

There’s no shame in taking your time to transition to full-time freelance writing, and we asked Kenzie about what has helped her grow her freelance business so far.

Kenzie has taken full advantage of what Contena Academy and her coach, Amanda, have to offer, and has made that into her own. We also love that Kenzie is one of the millennials who are crushing it as freelance writers.

Though freelancing can work for just about anyone, we’re strong believers that there are specific reasons why millennials are perfect for freelance writing, and Kenzie embodies that.

She’s tech-savvy, able to multi-task, and understands that the job market is evolving. She also pointed out that due to her age, with less responsibilities like kids and a mortgage, she can make the jump into freelancing. She says, starting freelance writing as millennial, “There’s more flexibility to take a risk earlier on.”

So, what’s next for Kenzie?

We’re confident that Kenzie will continue to grow her freelancing business and, when she’s ready, ditch the part-time job and work 100% for herself.

Keep in touch with Kenzie at: